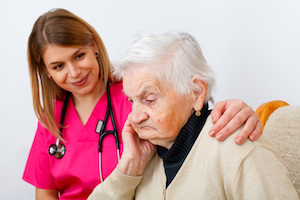 The Triple Witch Hour at a Homecare Agency: Why We Dread Friday Afternoons

Mrs. Mullen lives on her own, cared for by our live-in caregiver, Juanita. She is wheelchair-ridden, paralyzed from the waist down as a result of a stroke she had almost a year back. She has a loving and capable daughter, Linda, who is an attorney. Linda would have been the perfect person for Mrs. Mullen to live with, except that Linda lives in Delaware, hundreds of miles away.

We’ve had this relation with Mrs. Mullen ever since she came out of the hospital following her stroke. A short time later, Juanita became her primary live-in caregiver, and every time Juanita wants to take the weekend off, usually every other week, we send another live-in caregiver to fill-in. We thus provide services at the Mullen residence on a continuous basis, without interruption, and without fail.

On Friday afternoons, our weekend fill-in caregivers show up to replace weekday caregivers at client homes throughout our service area. Since many of our clients are like Mrs. Mullen in the “may-not-be-left-unattended” category, we are essentially hired to provide uninterrupted live-in services at many of their homes. We, therefore have various primary caregivers who, after working day and night from Sunday to Friday, are on Friday afternoons eager for their fill-in relief caregivers to arrive and take over for the weekend.

Not only are we tasked with providing for the safety and wellbeing of our clients, but we also have to –simply have to- relieve the weekday primary caregivers who, having worked hard all week, would have made rigid plans for the Friday night –plans that we better not upset. Therein lies the Friday afternoon drama: when the relief workers don’t show up, the primary caregivers have to stay on the job until we can find someone else to relieve them, something that might take several hours at best.

“Therein lies the Friday afternoon drama: when the relief workers don’t show up, the primary caregivers have to stay on the job until we can find someone else to relieve them, something that might take several hours at best”.

That sets the tone for the “witching” factor: caregivers calling in late at the last minute or, worse, weekend relief caregivers who on occasion simply don’t show up and don’t even call.

Care coordinators on their knees

The task of scheduling caregivers to be at certain homes by no later than set times falls on the care coordinators, or care managers as they are at times referred to. At my agency, we have three coordinators, and it isn’t rare that we overhear a coordinator “begging” a caregiver to drop what she’s doing and rush, for example, to Mrs. Mullen’s home.

And that isn’t always because the coordinator doesn’t have other caregivers on standby. It is more likely because only that particular caregiver has the requisite know-how to meet Mrs. Mullen’s needs. That caregiver would have previously been to Mrs. Mullen’s home, with good knowledge of how to get to her home, and how to provide her with good care and companionship once she’s there.

Thus, if wheelchair-ridden Mrs. Mullen weighed 200 lbs. we couldn’t just send any caregiver there. It has to be someone who could execute smart transfers for a person that heavy, quite apart from the patient’s other needs. To relieve Juanita at Mrs. Mullen, of the dozens of caregivers we have, perhaps only a handful a) live within commuting distance from the Mullen residence, b) can do that kind of lifting, and c) happens -quite incredulously- to be available at the last minute for a 48-hour live-in assignment.

The ultimate in responsibility

Short term forgetfulness, cognitive impairments, Sundown Syndrome with Alzheimer’s, paraplegics, advanced Parkinson’s, and people who are very frail are some of the folks in our charge. Their sons and daughters are at work and living separately, frequently in other states. They represent the ultimate in responsibility to all of us at the agency because they are care recipients who cannot be left unattended, not even for 10 minutes.

By Friday afternoon of every week, we thus worry mostly about those vulnerable clients, and in particular, those whose next of kin, or “responsible party” as we refer to them, are out of town. And even among those, there are always a handful who may not be staffed by just any caregiver –they require attention by only one or two very special caregivers.

Over time, we learned how to “attack” the Friday witches: we prepare, prepare, and prepare some more. We prepare all week, and we develop contingency plans for all foreseeable eventualities. Most weeks, we are able to go home late on Friday evenings, having tucked in everyone with their rightful caregivers. Lisa would be squarely booked for 92 years old Ms. Francis who loves her and who would throw a tantrum if we were to send anyone else. Mrs. Kulowski, who fusses and curses anyway, would go bunkers if her rightful relief caregiver didn’t show up. And so unfolds our weekly battle against the unforeseeable, mostly last-minute call-outs.

I remember one or two fateful Friday afternoons though when I felt like the oxygen had been sucked out of my lungs – out of our entire office.

Because of a lot of flu going around, we occasionally have what comes close to a tsunami of call-outs: one caregiver after the other calling out sick. We work our database, tap our short lists, make a hundred calls and, after all is said and done, we are left with two caregivers that we simply cannot find reliefs for. We then have to go to the nuclear option: send people from among the office staff, inlcuding me, to fill-in. We go to client homes ourselves, often because the caregivers in attendance there have for instance both done two non-stop weeks in a row, so we simply have to relieve them, until proper caregivers can be dug out and assigned.

At the very last minute, however, one of our coordinators usually pulls a proverbial hare out of the hat and produces first the one, then both of the needed caregivers. The point nevertheless is that when all else fails, we, the office personnel, have to rush and fill the gap.

That is how come we dread Friday afternoons.

Marina Matsiukhova works for the Nurse Plus Academy, which creates free NCLEX-RN practice tests. Their other resource is cna.plus, which helps CNAs prepare for their certification.