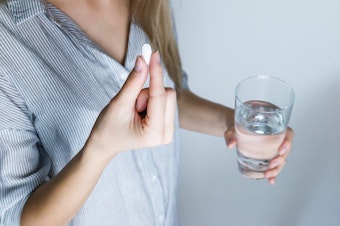 What is Symproic and its mechanism of action?

Symproic is an opioid antagonist that selectively blocks the mu receptors in the gastrointestinal tract, and, as a result, reduces constipation caused by chronic opioid use. It is a peripherally acting mu-opioid receptor antagonist (PAMORA). The active ingredient in Symproic, naldemedine, is similar to naloxone but it cannot cross into the brain. Naloxone is a pure opioid antagonist used for the treatment of opioid overdose.

Opioids are narcotic medications used for the treatment of pain. Examples include hydrocodone, oxycodone, morphine, codeine, hydromorphone, and fentanyl. Opioids reduce pain in the body by binding to mu, kappa, and delta receptors. These receptors are found throughout the body, but pain relief from these medications is mostly due to their ability to cross the blood-brain barrier and act in the brain and spinal cord. In addition to being the primary opioid receptor responsible for the majority of the pain relief experienced by opioids, the mu opioid receptor is also found in high numbers in the gastrointestinal tract where if activated can lead to constipation (especially at high doses of opioids used for long periods of time).

Symproic selectively blocks mu receptors found in the gastrointestinal tract and not elsewhere in the body (particularly the mu receptors in the brain and spinal cord). Therefore, it reduces the constipating effects of opioids in the gastrointestinal tract while still maintaining the pain fighting properties of opioids elsewhere in the body. Symproic helps treat constipation in persons that use opioid medications chronically to manage pain.

What is Symproic approved for treating?

Symproic is approved for the treatment of opioid-induced constipation (OIC) in adult patients with chronic non-cancer pain. OIC is a common problem in patients on long-term opioid therapy, negatively affecting their quality of life.

The efficacy of Symproic for the treatment of OIC in chronic non-cancer pain was evaluated in two randomized double-blinded clinical trials. The patients included in the two studies had self-reported OIC after at least four weeks of opioid use. In both studies, patients received either Symproic 0.2 mg once daily or placebo for 12 weeks. The first study included 547 patients and 48% reported constipation relief in the Symproic group compared to the 35% in the placebo group.

The second study included 533 patients and 53% in the Symproic group reported constipation relief, compared to 34% of patients in the placebo group.

Symproic was approved as a Schedule II controlled substance because it is structurally related to naltrexone. However, the makers of the drug have submitted a petition for a rescheduling of the drug or removal of the controlled substance classification to the US Drug Enforcement Administration (DEA). After an extensive review, the DEA did conclude that naldemedine has no potential for abuse and does not meet the findings for control under any schedule.

What are side effects of Symproic?

The most common side effects of Symproic observed in clinical studies include:

Other side effects of Symproic include:

What is the dosage of Symproic?

Symproic is available as a 0.2 mg tablet. The recommended dosage is 0.2 mg orally once daily with or without food.

What are Symproic drug interactions?

Rifampin (Rifadin), carbamazepine (Tegretol), phenytoin (Dilantin), and St. John’s Wort significantly decreases the levels of Symproic by increasing the activity of the enzymes that break down the drug. Symproic should not be combined with these drugs because they may reduce the effect of Symproic.

Fluconazole (Diflucan), diltiazem (Cardizem, Cartia XT), erythromycin (Ery-tab), atazanavir (Reyataz), aprepitant (Emend), ketoconazole, itraconazole, clarithromycin (Biaxin), and ritonavir (Norvir) increase the level of Symproic in the body. Symproic-related side effects should be monitored if Symproic is combined with these drugs.

Other drugs that may increase the level of Symproic in the body include:

What are warnings and precautions for Symproic?

Symproic should be used carefully in patients with gastrointestinal perforation, such as lesions of the stomach or intestines. These patients should be monitored for severe, persistent, or worsening abdominal pain. Symproic should be discontinued if there is the development of symptoms.

Opioid withdrawal is a condition that may occur after stopping long-term use of any opioid-containing drugs. Patients who have disruptions to the blood-brain barrier may be at an increased risk for opioid withdrawal. These patients should be monitored for symptoms of opioid withdrawal, which include chills, excessive sweating, hot flush, sneezing, and vomiting.

What is the cost of Symproic?

The cash price of a 30-day supply of Symproic is $317.99 before any insurance or coupon is applied.