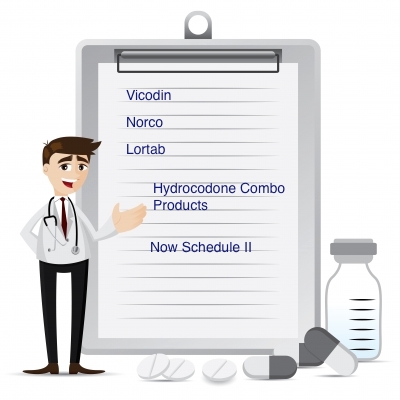 Hydrocodone combination products are the most commonly prescribed pain products in the United States. Vicodin, Lortab, Norco, and similar drugs contain a combination of hydrocodone and acetaminophen (Tylenol) or ibuprofen. Although hydrocodone by itself has always been a Schedule II medication, combination hydrocodone products combined with non-narcotic medications such as Tylenol and ibuprofen were supposed to have a reduced potential for abuse, allowing these products to obtain Schedule III status.

In 1999 a physician submitted a petition requesting the DEA to consider rescheduling hydrocodone products. A scientific and medical evaluation was completed by the Department of Health and Human Services and on January 25, 2013, a Food and Drug Administration (FDA ) advisory panel of experts voted 19 to 10 to change hydrocodone containing products from schedule III controlled drugs to the more restricted schedule II controlled substance category. In February 2014, the DEA announced the intent to move hydrocodone combination products from Schedule III to Schedule II.

What is the difference between a Schedule II and Schedule III medication?

The Controlled Substances Act was passed by Congress in 1970 to place tighter regulations on prescribing and dispensing of medications that have the potential for abuse and misuse. Medications that meet these criteria are placed into one of five classes referred to as Schedule I, II, III, IV, and V. The scheduling of medications is determined by the DEA based on the medical benefit the drug provides and its risk for misuse and addiction. Schedule I drugs are determined to have no medical benefit and a high risk for misuse and abuse (e.g., heroin). Schedule II medications are those that have demonstrated medical benefit but have a high potential for psychological addiction, physical dependence, and potential misuse (e.g., oxycodone), hence requiring careful monitoring by a physician. Schedules III, IV, and V are differentiated by the degree for the potential for misuse, abuse, and addition. Schedule II medications have more restrictions for prescribing and dispensing when compared to medications under schedules III, IV, and V. For a physician these restrictions include not allowing them to call or fax in the prescription to a pharmacy and refills are not allowed. For a pharmacy, these restrictions include keeping the medications locked at all times when not being dispensed, more paperwork for tracking every unit that comes in and out of the pharmacy, and submitting this paperwork to the DEA routinely. Some states have additional requirements for prescribing and dispensing Schedule II medications.

Some healthcare providers did not support reclassification

The DEA allowed the public to comment on rescheduling hydrocodone combination products following an advisory committee meeting in 2013. They received a total of 573 comments from pharmacists, government officials, surgeons, and members of the public. Overall the ruling was supported, with 52% (298 comments) of those that commented supporting the change and 41% (235 comments) opposing. The majority of those who opposed the ruling were pharmacists and pharmacy students. Large pharmacy organizations, such as the American Pharmacist Association, were also in opposition to this ruling.