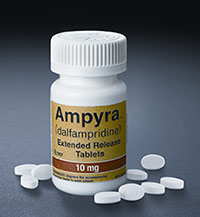 Ampyra is a potassium channel blocker used for treatment of multiple sclerosis (MS). The mechanism of action is unknown. It is blocks movement of potassium from degenerated myelin sheath (the protective coating around nerve fibers) and increase nerve signal conduction from the brain to other parts of the body. Ampyra has been shown to increase conduction of nerve signals in animals. Ampyra is the only medication indicated to improve walking in patients with multiple sclerosis. This was demonstrated in an increase in walking speed. Patients with MS have difficulty walking because there are areas of demyelination (neuron damage) that affect walking ability.

What is Ampyra used for?

What is the dosage of Ampyra

The recommended dose of Ampyra is 10 mg orally twice daily with or without food about 12 hours apart. Tablets should be taken whole and should not be divided, crushed, chewed, or dissolved.

How well does Ampyra work?